I’m a little worried about my gums. I had porcelain veneers placed a couple of months ago. Since it happened. my gums have been inflamed and painful. I went back in and the hygienist said she’s never seen it happen before. The dentist came to look and both of them accused me of not brushing enough. I was quite annoyed. I’m a grown adult and know how to brush my teeth. Why in the world would I not brush after spending a fortune on these porcelain veneers? When I went back in for a routine one-month follow up he removed some excess cement. That has helped some but I’m still in pain. What do you recommend I do? 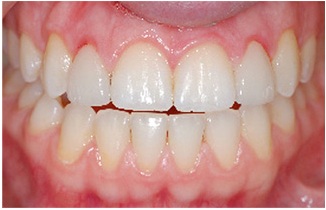 These lateral incisors are inflamed from poorly done porcelain veneers

When patients have a smile makeover they’re proud of, they tend to take better care of their teeth, not worse. I don’t like it when medical practitioners blame patients for things they don’t quite understand. Please bear in mind that I haven’t examined you so I can only give possibilities.

There are a few possibilities going on here. It can be one or a combination of them. With the first possibility, he could have left some cement in that is irritating the gums. This seems a very real possibility, especially because you said he removed some excess cement a month out from placement. The cement should have been removed right away, while it was still soft. The fact that your gums felt a little better after he finally did remove it. Now it is getting a chance to heal.

That doesn’t mean that is the only thing irritating your gums, though. I say that because It doesn’t sound like your dentist has invested a lot of time in understanding cosmetic dental work. Another option is there is some unevenness or temporary shelving in the margins between the porcelain veneers and the gumline. This is sometimes called bulky margins.

This will cause things to get trapped in between the gums and the porcelain veneers, leading to inflammation and, eventually, gum disease and tooth decay.

There are other possibilities too such as the extended wearing of temporaries, the veneers encroach on the gingival attachment, and, allergies to the materials used in bonding.

Dealing with a Disastrous Smile Makeover

If it is just a matter of the cement being trapped there, then when your dentist removed it at the last follow-up, that should help as it heals. The second opinion dentist can make sure there isn’t any more there. If, however, the problem is with the margins, the porcelain veneers will have to be completely re-done. Because it puts your oral health at risk, you are entitled to have them re-done free of charge. Though, my recommendation would be to get a refund and have a more experienced cosmetic dentist do this.

Look for someone who is recommended on the mynewsmile.com website. They are highly skilled and they will sort them by area of the country for you.