I had a dental implant placed on one of the teeth adjacent to my front teeth. The dentist told me at the time that the sinus cavity was perforated by just a few millimeters, which he said is fairly common. He did not put me on an antibiotic at the time because he said it was unnecessary. Just six months after the implant was placed it had to be removed because he said the bone was not developing properly. After the removal, he again gave me no antibiotics because he said everything went fine.  My instructions were to wait a year for the bone to fill in and then we’d start again. He also said there was no need to repair the sinus perforation. A few weeks later, I started having problems. First, I was having crackling in my ears and congestion. I called and they said to use Flonase. I did but things seemed to get worse. I went in and they insisted everything looked fine. I disagreed because it felt like I was developing an infection. He reluctantly agreed to give me some antibiotics. Since then, everything started to clear up and I feel better. My question is should I have gotten an antibiotic from the beginning? Am I going to have any better luck the next time I go for the dental implant? 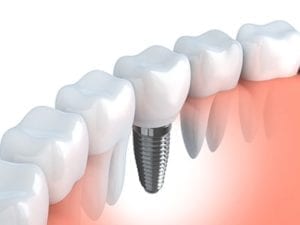 You’ve been through a lot. I’m impressed you are willing to give it another go to get your dental implant. Good for you! It definitely is the best tooth replacement option. Before you do, I want to make sure some things are addressed by your dentist. However, let’s start with your question. It was not really needed to give you an antibiotic from the beginning, but when you started having problems, that would have been a good time. Believe it or not, that isn’t the real issue with your case.

The second big issue is diagnostics. My suspicion is that he did not do adequate diagnostics in preparation for your procedure. This may also explain why the bone did not integrate properly.

There should have been a number of x-rays done, including a 3-dimensional one such as a CT scan. The CT scan is especially important so that there isn’t a sinus perforation, such as what you experienced. Additionally, those diagnostics let the dentist know if there is enough bone structure to support the dental implant.

Can You Still Get a Dental Implant?

The short answer to the above question is yes…but. It is not as simple as your oral surgeon made out. First of all, the bone is not just going to fill out on its own. You will have to have a bone grafting procedure done. Once that is completed, you will need a time of healing before starting over.

While you can have the dental implant done, I do not recommend you use the same dentist/oral surgeon unless they can tell you what they are going to do to prevent this issue in the future. Another important point is that it should be the dentist who determines the placement of the implant, not the oral surgeon. Make sure you visit the dentist first.